DÜSSELDORF, GERMANY -- Taiwanese auxiliary equipment maker Shini Group is unveiling a new image campaign at K 2013 -- part of an effort to separate itself from rampant copycats in the China market -- while it readies new factories in China and India to ramp up capacity.

The Taipei-based firm, one of Asia's largest makers of auxiliary equipment for plastics, was unveiling a new sleeker look and cleaner, black and white color scheme, to put some distance between itself and some mainland Chinese firms it said used similar names and claimed to be part of Shini.

At times the copycats would be so bold as to exhibit as Shini at local trade shows, the company said. 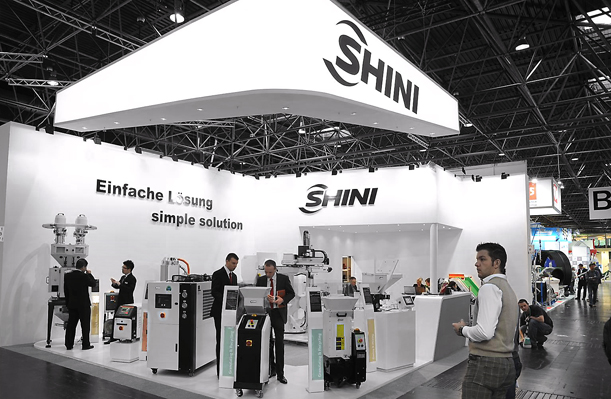 "The reason we do the new image is there are a lot of copies in China," said Alan Chen, director of overseas business and marketing in Shini's corporate technology center in Dongguan, China, in an interview at the company's booth at K (Hall 11/B-57-2).

Changing color schemes is not the only tactic -- Chen said the company is focused on upgrading its product offerings, switching from selling products to designing integrated systems of robots, material handling and other equipment with knowledge gained in four decades in business.

"Changing colors is the first step," Chen said. "Changing how the company operates is the second. We want to sell solutions."

On its website, a company press release from June listed eight companies and associated websites, most of them from southern China's Guangdong Province, that Shini said were using similar names in violation of Shini trademarks.

"For a long time, unscrupulous operators were counterfeiting [the] Shini brand with many identical or similar trademarks, products as well as websites, which poses severe damage to Shini brand's reputation," the company said. "Until now, we have received many customer complaints regarding the purchase of counterfeit or inferior products."

But Chen said the company also wants to look forward and develop new products and strengthen its position in the market, focusing on staying ahead of competitors that compete based on violating intellectual property.

As part of that, early next year the company will open a new 173,000-square-foot factory in Pune, India, tripling capacity of its current plant in Mumbai, and open its fourth plant in China, in Chongqing.

The new 145,000-square-foot China plant is designed to tap growth in western China, and joins existing Shini factories in Dongguan, Ningbo and Pinghu, China, and in Taipei.

At K, the company also announced that it was opening a new sales office in Stuttgart, Germany, its first in the country.

Shini unveiled two new products at the fair, its SGD-12 gravimetric doser and a new water heater with much finer controls.

The new water heater, its STM-910MW model, uses a control system to allow water temperature to be controlled within plus or minus 0.3 degrees Celsius, compared with plus or minus one degree on earlier models.